This is a very large kingdom that stretches out to all the homes seen on the map with markets, high-end homes, and a high population of 500,000. This is mostly a magic-focused community focused on traditional values. There are woods with skyscraping trees and areas of mushrooms as large as the trees. The mushroom forest near the River Kingdom is often lit up with pixies.

Rules of the Great Spirits:

1. Everyone is born innocent and pure until proven otherwise. All that is innocent must be protected. If you kill an innocent, you no longer have that right to protection.

2. The forests and flowers are a gift. They must be treated with respect, maintained in good health and cherished.

3. Kindness to all is celebrated

4. No one should force love onto another. It is given, not taken.

5. Do not take that which is not yours.

6. Do not trespass on to the homes of others.

7. No hunting for animals in sacred areas.

The Millinia Family have ruled for a long time.

This is a large field with a few dormitory homes beginning with the bottom of a large tree and circling up to the top. There are also classrooms in some small cottages in order to teach mostly males how to utilize their abilities for combat as well as learning weapons and defense tactics. They make use of large open areas in the woods to train that is walled off and secured.

This is the most elite area of the fairy kingdom. They use a much more sophisticated upper-class architecture here and the entire village surrounds a gigantic tree with pink leaves that fairies tend to worship and call the Wishing Tree. There is a big open plaza surrounding the tree, hence the name. Restaurants and businesses boom in this area. There are also churches of worship. An amora station is here.

There are several schools in this area, compact in one area near the training center in order to protect children if need be. There is a school for ages 0-14 where basic education such as reading and writing is taught. Then magic school often begins. When boys reach eighteen, they commonly go into combat training school or into higher-level education. Everyone is taught all their abilities to some degree from 14-18 but everyone specializes in some more than others. It is up to them after eighteen years old to go study abilities further to master unless combat training is attended. Many, mostly females, go into the healing center to study healing and master it, aiding in healing other fairies and even other species that pass through. There is also an etiquette school for girls for the wealthier fairies.

This doubles as a hospital that welcomes all species and a school for apprentice healers to learn in classrooms and by shadowing masters of the field.

This is where political officials speak on matters for the kingdom as well as converse with other kingdoms. Very few fairies have say here. Risa's family has some influence here.

Many of these are outdoor markets or stalls that sell clothes, food, staffs, wands, jewelry, hygienic products, and potions. Advanced technology and upper-class clothing/jewelry will be found exclusively in the Kingdom Plaza. These tend to be cheaper goods.

A collection of large homes and mansions from those with ancient wealth. Risa's family as well as Dionaea's are well off and live in this area. Homes range in size but are a lot bigger than standard.

These are either homes within trees, just like even some of the noble homes, or in cottages. They are decent and depending on your wealth, you can afford some with second floors. The pink are collections of homes but homes are also sporadically through the forest that surrounds the clusters of villages, in the midst of the trees. 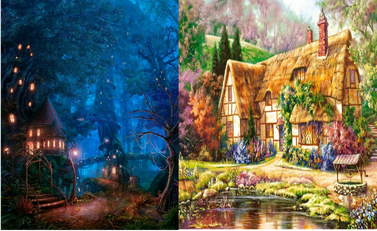 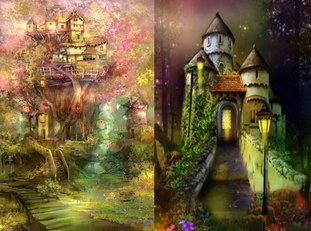 The Pretty Flower - A rather wild bar in the middle of the River Kingdom Plaza. A lot of young fairies like to party here. Musicians are common.

Tree Lounge - Inside a large tree near the plaza is a bar and restaurant. Species from all over flock here to try the sweet and unique fairy drinks.

Daisy - A quaint and tiny bakery in the River Kingdom known for their cakes.

Malalune - A cafe with an assortment of brightly colored caffeinated drinks as well as normal coffee. This is also in River Kingdom.

Books and Cookies - A small library in River Kingdom up that requires a flight to reach its entrance, which is up in a tree by the plaza. They give very cheap cookies and caffeinated beverages.

Community content is available under CC-BY-SA unless otherwise noted.
Advertisement