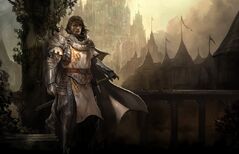 When humans enter Avalia, their genetics and the energy will mesh differently with the environment due to the sun's power. They gain abilities from the elements around them in the world. The manipulation includes being able to summon the element, use it as a weapon(ex: shoot fireballs), and the ability to withstand environments with it. Those who manipulate water can breathe within it while those who manipulate fire can withstand it without burning. Humans are extremely powerful in this world and widely feared/hated/sought out. In fact, they're forbidden. It is unsafe to be human.

Humans were once welcome in Avalia. They came through rifts and exchanged knowledge and culture with Avalians. Music, books and holidays even helped influence the nation of Avalia in its present time.

Humans can attain the ability to control one of the following elements: fire, water, air, lightning, and earth.

Community content is available under CC-BY-SA unless otherwise noted.
Advertisement